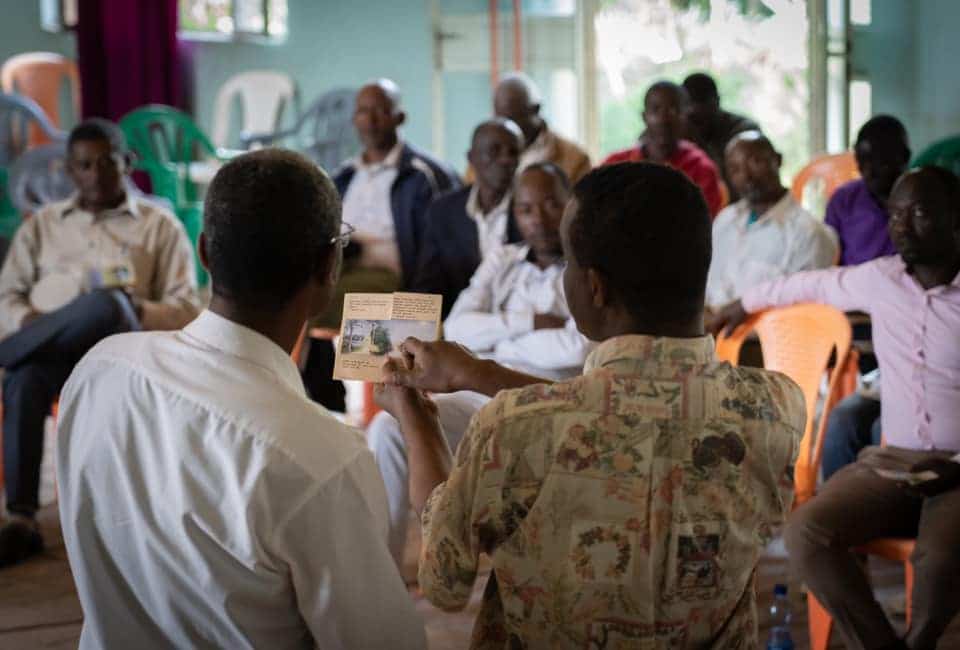 One of the staff has gone to Gombe to deliver radio teachings to the station there, and is hoping to arrange a future training, and may be able to stop in Bauchi to deliver radio programs too.

Sam is going to travel to Kano to do follow-up training with those we trained in February this year. They are planning to go out for outreaches now. He is going to help them with a refresher training and additional guidance on how to conduct the outreaches.

In mid December they are meeting with leaders from different churches to plan for the HBB conference which has been postponed to next year.

Last week Peter and the former sheik recorded 13 episodes of radio program, and next week they are hoping to record 13 more tv episodes.

They are working on reports and plans for next year.

The training in Gindiri, Peter said is so successful, there were about a hundred and thirty students. Some of those that we trained in previous years came and told the staff how they are using the training in their fieldwork and their places of assignment. That really encouraged both our staff and the students.

There were two places that they did outreaches, Bauchi and Lafiya. The people that we trained were able to use the gospel card in sharing Christ with people they were ministering to! Sam himself was able to follow up with 45 people, and do more extensive follow up with 13.  There were supposedly around 2374 new converts from the outreach, about 1085 people that rededicated their lives. They prayed with 2542, there were 23 people delivered from demons.

When Sam was preparing to go to Lafiya, he felt sick, and was diagnosed with typhoid and malaria, but he came back home safe.

Sam asks that we keep praying for the new believers. When Sam came home both his two children, Grace and Weng, were sick and were unable to go to school.

Ishaku Pate reported on the training, which had people trained from five states. He reported that in targeted areas where they were sent, everyone was amazed at the success of those who had been trained. In Zone A, in Bauchi, where the conference was conducted. There were 400 new converts, and 208 rededicated their lives to Christ, 40 people were delivered from demons. There were 26 people Ishaku followed up with extensively, and 15 of them he was able to follow up with. The way preachers preached in the camp was just like a teaching, they didn’t have an altar call. The pastors and reverends joined the teaching.

Ishaku has a motorcycle he uses for ministry, but a car smashed it. The council chairman of the area was the driver of the vehicle and is now claiming he has no money to replace it. Pray that God provides money for a motorcycle.

Sam’s brother’s wedding is in December. He is having difficulty arranging the wedding as the prices of everything have gone up.

Zainab just had a graduation on Saturday of 12 of those that she trained from the widows and underprivileged. She taught them for six weeks. She graduated five of them. Seven of them couldn’t raise the money to complete the practicals, and so it is put off until they can raise the money.

The Muslims she is following up with are still staying with their faith. She prayed with two last week, and wasn’t able to meet with one who is suffering from weakness and (she is pregnant with twins at 48 years old) Please pray that God protects her and the babies. Zainab normally sends them bible references at night and shares the word of God with them and prays. They are trying, they are secret disciples, the husbands do not know yet.

The prices of food have tripled. A lot of families are really suffering but we are trusting God for his provision.

Zainab’s mom is feeling better. Zainab’s cousin needs a new kidney, pray that they will be able to find a kidney donor. This woman, Joy, is an FFICM trainee, and one of Zainab’s closest prayer partners. Pray for complete healing!

There are about 80 pastors and evangelists in Sawla. Unfortunately no women came, as each church was only allowed to select two people and no women were selected. The place is very hot, and the travel was very difficult. It took them 12 hours on the road. Keep praying for everyone. They are hoping some women might come tomorrow.

Rich is preaching on Sunday, there is a committee meeting Wednesday for the conference. No one wears masks down here at all, but they are doing some social distancing. Next week Rich is traveling to the Toomi, and then on to the Hamar. Keep praying for the training this week and next week as they come.

Continue to pray for Mercy and Dara’s health! Dara is going for more immunotherapy shots today and Wednesday. Last week she needed oxygen after the treatment. Pray she doesn’t react!

Continue to pray for David’s son!

Pray for the Murdoch Foundation grant to go through! Praise God that the review of the grant last week went well, and thank God for Susanna Ballard’s hard work on it!

Pray for the communications team as they set up the podcast for December!

Pray for the materials team (Susanna, Dara, and Rich) as they work to complete outstanding translations and work on a book and new materials.