Rich and Pastor Yisa pictured above

Cameroon is experiencing a lot of internal unrest and terrible violence these past few months. The city where we held the large conference and training, Belo, has been at the epicenter of the worst recent confrontations between the military and rebels and is now a ghost town and Anyadua, the site of the training that Peter held, with all of these wonderful trainees pictured below, is also deserted after an attack by the army. We have no idea what happened to them, we hope they are in hiding in the bush along with many of the other inhabitants of Anyadua. 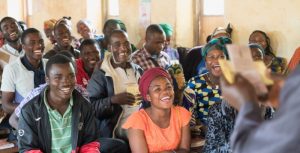 Pastor Yisa is the pastor of the local area surrounding Anyadua, he was trained by FFICM last year, and has been actively training ever since! The last group he trained was so committed and excited about the materials they begged him to ask us to write more materials for them! We spoke with Pastor Yisa just last week, and he told us an incredible story of God’s protection.

While he was out recently, a group of armed and masked men approached him, bringing a man with them. “You’re a pastor, right?” They asked him. “Yes,” he replied. “Good, so can you pray for this man? We are about to kill him,” they told him. Pastor Yisa said he cannot remember a word of what he prayed, but that while he was praying he was begging God to take control. As he finished his prayer the leader told him the prayer had moved him so much that he was no longer going to kill the man!

While the situation in Cameroon is dire and we are afraid for our brothers and sisters in Anyadua, we remember God who listens to our prayers and cares for every single person more than we can possibly imagine. Please join us in lifting up pastor Yisa and the people of Anyadua in your prayers! God hears.