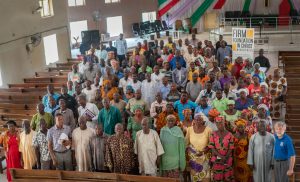 The ministry staff went to see the Bishop of the Lutheran Church (his deputy was among those we trained at the RCCN Jalingo) and he highly recommended our training materials and strategy for his denomination. The bishop was impressed and said he wanted us to train all the pastors, evangelists, and leaders in his diocese.

After hearing thus response, the president of FFICM (Rich) flew from the USA to attend the training in which we had over 60 people. We also brought four other trainers from Jos because they originally told us that they were expecting 250-300 people.

After the welcome and introduction by Bishop James J. Jen, we distributed the materials and began the training. As usual, we started with the gospel card and asked them to go and share the gospel with someone in the evening, but the following day only 3 people indicated they did that! So the next day we divided them into five groups and assigned leaders to each group who led them to where they were expected to witness. They were able to overcome their fears in the context of the group, and were surprised to discover that people were really interested in listening to them. 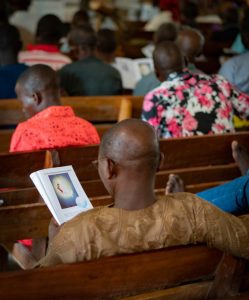 In the group that Peter went with, his team shared their faith with 7 people. Peter himself shared with six people, and three of those prayed to receive Christ. The next day, Peter went to follow up with them. Two of those that had prayed to received Christ came and sat with him as well as two other women. As they started up, two more elderly women came, so by the end there were 8 people in the follow-up class! After the teaching they started asking questions that had to do with assurance of salvation. We then prayed for a son of one of the women that was having fever.

In another group, they went to a house to witness and the man welcomed them and came out and sat with them, but the woman was not open. When they finished speaking they challenged him to join them for follow up the next day, but when they came the next day the woman was there, but not the man. So they use the follow-up 1 materials to teach her. She started saying that she too was an evangelist and they should go to the mountains to preach to those who have not heard the gospel instead of her. But after saying all this she confessed her sins and asked them to pray for her husband who is a drunkard. 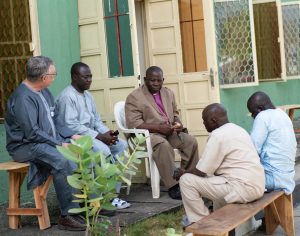 In another group when they went out and a man prayed with them, and they set an appointment to meet the next day. But when they came they next day, the man told them, “You were lucky that I listened to you yesterday, but today I will not, because in the whole of our family there is no Christian, and I will not want to be the one to break that record.” So he refused, and so they had to move to another place where they met a lady who did listen to them.

The bishop set a good example to all the pastors by sitting in the class from the first day until the last day and participating in all the class practicals. As the training was going on, the bishop reported it to the secretary to the Arch Bishop. He asked for the phone number of the National Director so that they can plan how to apply this in the whole LCCN. The bishop said in his closing remarks that this training had been an eye-opener as to how much they need to apply what they have learned, and that if the FFICM team comes back in the next year or two, he is confident we will see the results of the training in additional converts. He even expects that by then, churches will be planted as a result of how they put into practice what they have learned.

There was a Muslim convert there who stayed throughout the training, he listened with keen interest and joy to know what we were teaching. Comfort, one our trainers from Maiduguri, went through the gospel card with him one on one to be sure he understood his faith. After that she shared the follow-up materials with him. Immediately after the training his relatives notice the changes in his character and they were threatened to kill him, so he ran to the church, and he has been taken to a discipleship center there in Jalingo. 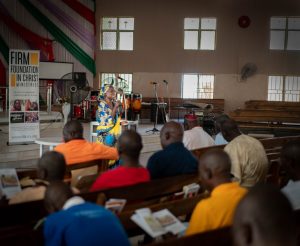 After that week, we traveled back to Jos, but we could not fit the five people all in the office small car with all our bags, so we sent two people on public transport and three traveled in the car. So we did the three hour drive and rested at Wukari, then continued the following day for the next six hours, crossing the ferry part way through the trip.

The next training, which was organized for Plateau state by New Life for All was not properly mobilized, even though they charged the people a registration fee to cover their feeding, accommodation and traveling expenses to where they will be taken to for field service which they will stay there for another one week. There were 8 people who registered, but there were three additional leaders who stayed through the training as well. They were just encouraged to share their faith in the evenings, because they were going to be sent to the field for the work the following week anyways. After the training, they were sent to Shendam local area where they were to stay for one week evangelizing and conducting follow-up training.

We had time also to meet with other leaders and plan on our next ministry engagements. We met with the general secretary of COCIN (one of the largest evangelical churches in Nigeria) and they agreed that we should write a proposal so the leaders can decide if we can start training all the over 84 RCCs of COCIN!

We then also planned a conference where we want to bring together 1000 Muslim Background Believers, so that they could be trained on how to witness and to be encouraged. We also met with one former sheik who is now a Christian; he will be teaching the new converts and will also work with us on how to develop the follow up materials for MBBs!