Rich and Carl flew to Moscow and traveled to Krasnoyarsk, Siberia, where they were planning to regroup before going on to a remote location called Ungut to conduct a training for thirty local pastors. While in Krasnoyarsk, they discovered that the man who had been responsible for organizing the training (and Roman had met twice with) had developed serious brain swelling and a tumor and hadn’t been doing any of the preparations! He said there were 8 people at Ungut who could be trained.

Rich, Carl, and Roman decided that they would still conduct the training for the eight. While they were in Krasnoyarsk, they met with the gathered pastors and ministry leaders. Rich presented on the ministry of FFICM to train nationals to follow-up with new believers, and Carl spoke about the unique need to minister to pastors, who are often isolated from the rest of the church.

The church leaders were moved by the presentation and would like to partner in the future! The pastor of a retreat center outside of Krasnoyarsk opened up to Carl and said that he felt as though Carl had come to speak directly to his heart.

After the meeting, Rich, Carl and Roman prayed over the city. 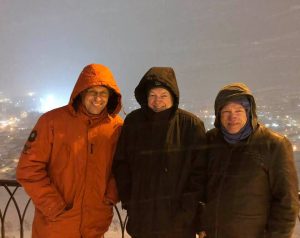 Pictured above are Roman, Carl, and Rich, after praying with church leaders.

Maxim, the pastor who had been moved by Carl’s testimony, invited them to visit the center for recovering substance abusers he runs. During the drive, Carl, with Roman translating, ministered to Maxim and helped him work through a difficult interpersonal situation. They were told that they would have to walk over a mile in the snow at the end of the drive, as there was no road leading straight to the center, but when they got to the field, there was a tractor attached to a cart. They all piled in, gratefully, with the supplies!

Click the link below to see the sled ride as it happened!

Rich and Carl spoke to the group, and one of them, Yuri, made a decision to receive Christ at the meeting. 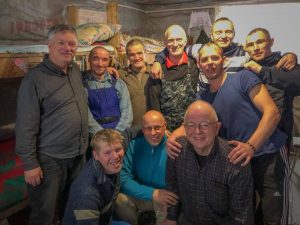 The next day, Rich, Carl and Roman drove to Ungut, a location far outside of cell-service and communication. 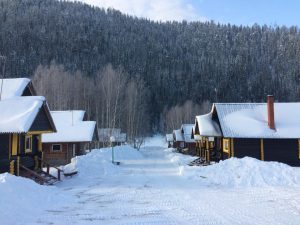 When they arrived, they discovered that the 8 people at the camp were not pastors or ministers, but also recovering addicts. Rich and Carl decided to reschedule the training, as their ministries focus primarily on equipping nationals and pastors.

Roman, whose ministry is primarily evangelism, stayed in Ungut to see what he could do, and ended up sharing the gospel with 30 children! 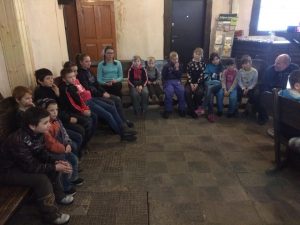 We thank you all for your prayers for the trip and for Rich, Carl, and Roman as they worked together! We would deeply appreciate your prayers for protection and wisdom for possible future trips to Siberia, as the enemy was able to thwart the training in Ungut by striking at the pastor who was responsible for the organization. Please pray for hm and his family. We thank God for bringing eternal fruit from the trip, and for accomplishing his purposes!

We were blessed to minister in this beautiful country, and pray that God continues to break in to Siberia in power!