Kansk is a beautiful town on the edge of the river Kan–a river which was once the site of a terrible battle, after which legend has it, the river tasted of blood for many years. Now the river Kan is a peaceful city where a pastor and his family hosted Sarina, Rich, and Roman in Kansk while they carried out their ministry. 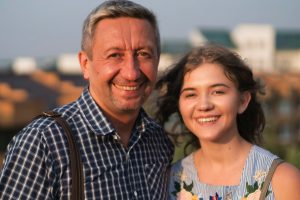 While in Kansk, the pastor’s best friend, who is not a Christian, asked if Sarina would visit his family and hang out with his daughter, who is interested in America and is learning English. Her name is Ana–though they call her Anya. Sarina loved hanging out with Anya and her family; they talked about their different school systems, social media (Russians don’t use Facebook very much, they have their own version) and their families. They both like a lot of the same music and tv shows because Anya listens to a lot of American music and movies!

Sarina was overwhelmed by the hospitality of Russians in general and especially Anya’s family, “They offer you tea or coffee every five seconds and keep asking until you say yes, so you have to drink really slowly! They really pampered us.” 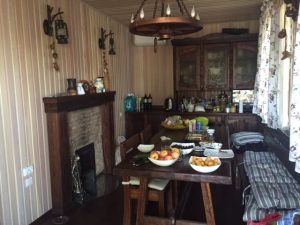 “They love their fruit and their drinks– they offer you tea or coffee every five seconds, keep asking until you say yes so you have to drink really slowly. They really pampered us!”

Christians don’t drink in Russia as drinking to excess has become such a problem, but they all drink Kvas, a Russian non-alcoholic drink that Sarina described as, “kind of like Kombucha, but instead of tea, it’s fermented bread excess.” They also drink a green drink called Tarragon that “looks like swamp water, but is bubbly and sweet!”

Anya’s family had Sarina over at their “dacha”—a summer house which is right on the banks of the river Kan. They have a banya built into their house. They told Sarina hat they sleep in their banya in the winter, which she could not believe she was hearing accurately until she saw them moving sleeping bags and blankets out of it before they turned it on. 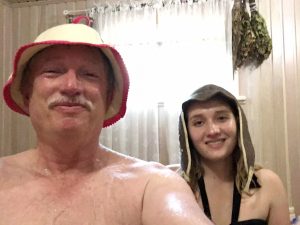 Sarina did the banya, 7 or 8 times–you go into the hot steam and then run out and jump into the river. She even up to the highest level (where it burns when you breathe and is 203 degrees!) and received the traditional Russian whipping with hot birch branches to improve circulation, before then running out and jumping into the river. They were all impressed with how many times Sarina let herself be hit with birch branches! 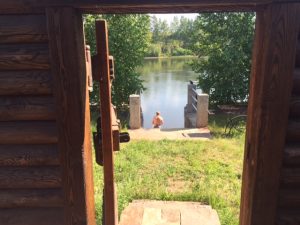 After the banya she went out to feed the fish with Anya. She had a hard time understanding that they really meant they were going to feed the fish, so she kept saying that she was a vegetarian, but at last they led her out to the river and she and Anya fed fish pieces of bread and relaxed while while a lightning storm flashed over the river.

Sarina and the rest of the team thanks you for your prayers for them on the trip as we continue to to get to know Russian culture and pray that our partnership in the gospel with them will continue to be fruitful!