The Ekklisiyar Yan’uwa Nigeria-EYN (Church of the Brethren) headquarters is at Kwarhi, roughly 10 kilometers from Mubi, a town that was destroyed by the Boko Haram fighters. We were 30 minutes from the Sambisa forest, which is the location the Boko Haram operate from. Most of the churches, if not all, in the town had been destroyed last year, and many Christians burned alive within. Our coming there was a great encouragement to the church, as they saw our co-worker Rick had come from overseas and the rest of us had come from other places to help them rebuild the spiritual lives of the people. 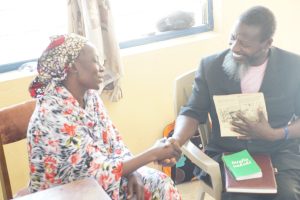 The training was originally planned for 120 people, but we ended up with only 51 people. Some of the church leaders whose job it was to pass along information to the coordinators did not do so. This denomination has about 70 districts, and all the district coordinators and secretaries were invited, along with the evangelism leaders of other churches. But the president of the denomination was there to welcome us and the director of evangelism and all of the other coordinators stayed all through with us during the training. We had to start the training early in order to be done in time for people to make it home by 6 pm—all of the roads are blocked by 6 in an attempt to protect travelers on the road from being killed by the Boko Haram.

The first day of the training was about the gospel tract presentation, and they were trained in how to communicate the basic things that a person needs to know to accept salvation, as simply and clearly as if they were talking to a small child. This approach was interesting to many; they said after the training that they felt as though they now knew how to reach out to people in their area. So when it was time for the field practical, they all went out to evangelize, and used the tract. The next day they came with reports of how they were using it; of how many were giving their lives to Christ and of how effective the tract is in catching peoples’ attention. 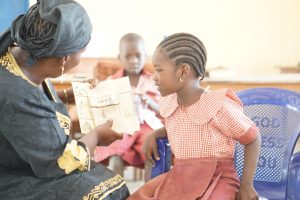 The outreach was an encouragement to all who participated, even in the midst of fear of the recent attacks. The trainees were surprised that when they went out and shared their faith, many people were anxious to receive Christ, and were willing to come for the next day for the follow-up training. The trainees think that the receptivity of the local people to the gospel has a lot to do with what the Boko Haram have done—people are afraid of death.

The director of Evangelism of the EYN Church, Rev. Daniel, who stayed throughout the training time and listened to all the sessions as we were teaching, said, “You have really helped the EYN church. This is what the church needed, but I was not sure who to call on to come and help us…I believe the Lord is going to do greater things than the outreach we have had already, as a result of this training.” On the last day he spoke and said, “We want to thank Firm Foundation for honoring our invitation to come and train us in this follow-up and evangelism and how to begin to disciple the new converts.” He also pleaded that we not be discouraged by the number of the people who had not come, because now that they have seen what we can do for them, they will do everything they can and prepare even beyond what we expect. 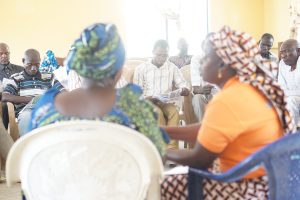 Evangelist Helen said, “I have been attending seminars on evangelism in Jos and in other places but I have not learned what I learned during this training; how to relate with the new believer and to follow him with the mindset that he is like a new baby that I have to handle with care.”

Another man said, “This is quite different from the way we pastors have taught people here. We have been more like fault-finders. But I have learned a lot from the trainers since we have started this training. They were not looking for faults in people. Even in the training, they did not focus on pointing out what people did wrong, they asked each trainee to think about what they would do differently, which makes the person feel confident and encouraged and willing to try again.”

Mr. Luka, who is from Gombe State, said he has learned how to take initiative in evangelism and follow-up without waiting for his leader to give him constant direction on what to do or where to go. During the devotions, he felt that he learned that some pastors are like wheel-barrows; when you push, they will move, and wherever you stop, there they will remain until somebody pushes them again. He said, “I was waiting on my superior to give me directions, but during this training I felt convicted about doing that and I am ready to move on with what I have learned from here. I pray that the Lord will give wisdom as I begin to put it into practice”. 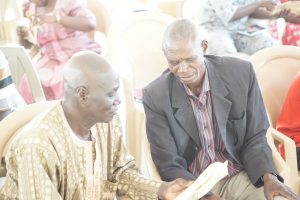 Another trainee said, “I have known God since I was a child, but I became lost, I was not praying as I am expected to, I was not witnessing to others, I was not living to the standard that God has required of me. When I came here, I listened to the teaching and I was just weeping quietly. I feel refreshed now, and I want to continue with this work. I have learned not just how to witness to unbelievers with patience and how to follow them up, but also how to relate to God personally as a son relates to his father.”

A trainee called Martha lamented that she has a lot of unbelievers in her house that she has not yet taken time to reach out to, and here we had in our company a white man (Rick) who traveled all the way to come and teach us how to reach out to our people in spite of the risk of this area. She said, “This training encouraged me about the need to devote my time and life to witness to others.”

Elder Aminu spoke on behalf of the coordinators and said that the life the trainers had led among them during the training was also a lesson to all of them, especially the way the trainers were relating with one another without showing any seniority or racial differences. It encouraged the coordinators as to how they should work with others under them. He then begged that we not be discouraged with the turnout and decide not to come to EYN again, that even though there were few of them there, they will put what they have learned into practice, and EYN will experience a change, and we will see the result of our work. 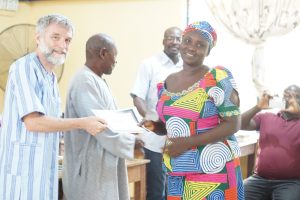 So far, one of the women that we trained has come and collected materials because she is preparing to train 150 people! Please pray for her, and for the other trainees as they minister in this highly dangerous area where they all have suffered terrible persecution. 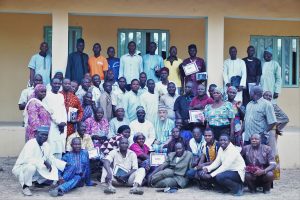