In May we went to Takum, where the headquarters of CRCN and RCCN are located, to conduct a refresher training for those we trained in October of last year. Some of the leadership of the churches and denominations were there. The leadership of New life for All also participated throughout the training. 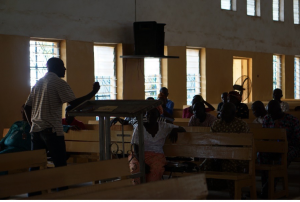 This refresher training opened my eyes to see how much we need to go back to places where we have trained people, to see what they are actually doing, and how they are doing it—and to learn how we can help them. We need to know answers to questions like these: What are the challenges they are encountering as they begin to use the training? How can we help them to overcome some of these challenges they are encountering? What were their plans during the strategic planning and how are they working on achieving them? How can we improve on our trainings or materials? We were able to ask these questions of our trainees in Takum and to help them work through the challenges they were facing.

We had series of obstacles and challenges on the trip.  As we left Jos, after we had picked up all of the seven sets of the follow-up materials, we forgot the Gospel cards in the office! The good thing was that all those who were with us in Takum were people we had trained before, so all of them came with their own materials and that made it easier to teach. But on the second day we discovered that the follow-up materials we had brought had been printed with mistakes—some of the pages had been mixed up. So we had to call Jos so that they could print the materials correctly, and send them to us. 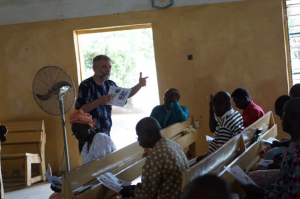 We then left for Jalingo, but on the way, the top gasket of our car blew off, and the car had to spend the night being repaired. We arrived in Jalingo to discover that there had been serious miscommunication between the leadership there and the training schedule had not been arranged—so we had to immediately work to reschedule the trainings for the middle of the week, and split up into two groups.

We started in the first group with just 12 people, but by the time of our short break, there were 26 people. The people that came had all come for the training before. Because of this, it ended up being a refresher training. We asked them to tell us what has been happening with the training they received before. They started by the explaining how they had been going out as individuals to use the materials, but not as a group. We strongly encouraged them to strategize together and to support one another. Those we had trained from CRCN (in Takum) had gone out as a team to use the materials. They were able to plant a church—their ministry was much more effective when they worked together! Also, those who went to Kebbi State with New Life for All for the outreach in October used the materials there.

Others shared that they have not been using the materials because they did not fully understood how to begin to use them on their own, but with what we have taught them now, they understand how to work together and think strategically, and will be able to effectively use the materials. 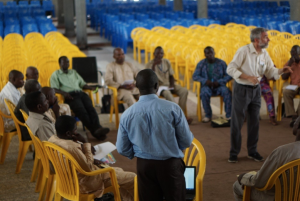 One of the leaders said that he did not actually fully understand the materials when we taught them the last time, but with this second teaching he now understands exactly how we expect him to use the training to evangelize and to work with new believers.

After that week, we went to a different location in Jalingo, where we were to meet pastors from different denominations based on the arrangements we had last year with one of the reverends from Reformed Church of Christ in Nations (RCCN). He was to work on the arrangement with other pastors in his denomination as well as the bishop of the Lutheran church (who was also among the people we trained at Numan in 2015). The bishop was to talk to 20 pastors from his denomination. There was a miscommunication when the man we sent to set the training up went to see Reverend Ande. The second time he went, he did not meet him personally, but left the message with his secretary, who did not deliver the message, and so they were not expecting us. This was why the mobilization was a failure. Also, a part of the United Methodist Church refused to come, because we had invited a faction of the Methodist church which is revolting against their bishop.

With regard to the Methodist faction that is splitting, the General Secretary for New life for All went and talked to the bishop to let him know that we were coming again this time to train pastors from the Methodist Church. But when we arrived at the venue, there was nobody in the venue. So Reverend Ande called some of the leaders of his denomination, and asked them if they could send some of their pastors and evangelists to attend the training starting Wednesday. Also  a man we who came with us from Jos called some his friends from the Redeemed Peoples’ Mission church, and we were able to have 23 people who came from Wednesday to Saturday.

The vice president of RCCN (who is one of those that sent his pastors to be part of the seminar) came again to see how we were doing and how many of his pastors were there. He said, “This is what the church needs now in a time like this”. He wants to speak with us to find a time we can come and do a presentation about our training to the general counsel (of which he and Reverend Ande are members). He wants us to come next year, or at the end of the year to train more than a hundred people. He also said that the RCCN and CRCN together have over a thousand pastors (five hundred in each denomination) that he would like us to train.

After the training, some of the pastors gave their testimonies;

One of them said this seminar is different from any seminar he has attended because this training made him understand that we need to go back to the basics, to the foundational issues of our faith, when working with new believers. He said that this seminar taught him how to relate with new converts. He said, “The materials were very simple, and I learn how to bring my teaching to the new believer in simple terms, the way one would talk to a young child.” 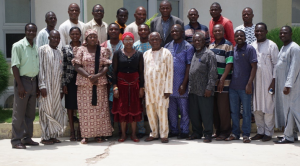 Another pastor said, “I went somewhere and opened the Gospel card, and some people were just looking, and they started coming to me. I started preaching to them, and they all gave their lives to Christ.”

One of them said, “I believe with what I have learned here, my life will never remain the same. From the gospel card through the seven follow-up lessons, the new believer will now not be a foreigner to me. I want to assure this ministry that I will go back and impact the church and the pastors that have not been able to come here.”

One of them said that before they were using a theological strategy in which they tried to impress the new believer with how much they had learned about the faith and how much they knew, but this training showed us how to keep it simple, to keep our teaching at the level of the new believer just as one would approach a new born baby. He said, “This actually changed my perspective, and now I will not over-feed the new believer.” He is among the eight people who will be going to a village where there is no church in order to plant a church there. So he believes that the materials will be of great help to them.

In the same way Rev. Collins said that even though this is his twenty second year in ministry but he has not attended a training like this anywhere, in which people are taught to relate to new believers, and how to translate wha they have learned to a new believer in order to enable them to have assurance in their faith. He said, “I have also learned how to be a model to the new believer. I have already planned to start the training with the elders of the church, the leaders of the agencies in the general church. I want to be sure that every member of the church knows his or her faith in Christ.”

We then concluded with the presentation of certificates the the prayer of dedication. They also wrote down their phone numbers and emails so that they can communicate with one another. They want to call the group together again some time to hear what is happening with each member.