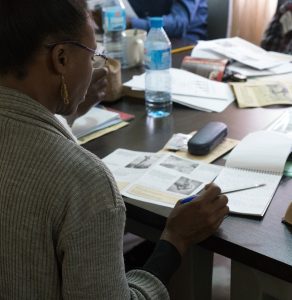 We started the year by receiving news of the wonderful results of the trainings FFICM has run in the past year. Then, after one week of prayer and fasting, we held a one week training in Jos for those who lead trainings. People all over the world flew into Jos. 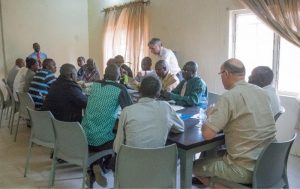 We had Richard Gardner and Rick Cordell from the US, Roman Baronowski from Poland, Eyasu Farenj and Eskindir Elemeyahu from Ethiopia, Habibu, Umar and Tsahiru from Niger Republic. Of the Nigerian FFICM team members we had myself, Sunday Mallam, Ishaku Pate, Ibrahim Itse, and from other ministries in Nigeria, Joshua Izang, Samuel Adang, Moris Izang and Sarah Izang from Rural Frontier Missions, Innocent Samson and Benjamin Yamden from New Life for All, and Samuel Fom from COCIN. These people were all drilled as to how to teach in such a way as to stimulate a change in attitude that results in action on the part of the new believer; and not just to teach to impart information. They were also taught how to draw new believers into a relationship with God, to begin to love God and to put their faith in God more. After that we picked some of those that we had trained and went with them to Cameroon so that we could all run a one week program for trainees there.

The training in Fundong began with over 120 people (as apposed to the 100 that we planned for). In our next area, in which we had also planned to have 100 participants, there were more than 200, so we had to begin to make arrangements as to how to stretch the few materials that we had. When we asked them to go out to evangelize as part of the practical, every single person went out, including the leaders of the local churches that were there. 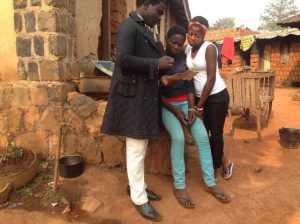 After this we separated them into four groups so that each trainer could observe and evaluate how they were doing, and so as many people as possible could practice teaching the class.

By Thursday when we invited them to worship God, people started dancing and singing with joy because of what they had learned. When we asked them to write and let us know what they valued most of what they had learned, many people wrote that they loved the gospel tract, which was so simple and straight forward; others stated that they were most excited about what they have learned about follow-up. A lot of them said they hadn’t known before that it was important to follow up with new believers; some even wrote that they were not followed up and had struggled with a lot of challenges, such as not knowing how to pray or study the Bible, having no interest in witnessing, or they did not actually love God or other believers. On Thursday evening, one of the trainees kept us awake for two hours, from 8 to 10 pm talking to us about her life and how this training has brought her back on track with God—she had previously decided not to have anything to do with the church anymore, but as we were teaching, she felt that her love for God will draw her back and enable her to continue relating with those of her church that have offended her. 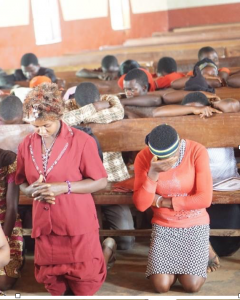 After the teaching, we had the joy of presenting certificates to all of the trainees. After this we prayed to commission them, and all that were trained were asked to kneel while all of the ordained ministers and trainers present prayed for them. 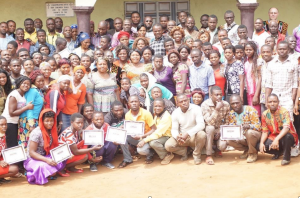 We have over one hundred testimonies from the trainees, here is a small representation of some of them!

One pastor who was trained shared that he went out and began talking about the gospel with somebody, but the person did not want to listen because he was sick. So the pastor and his companion asked him whether he was willing for them to pray for him? They prayed for him that he would be healed from his illness, and left. The next day he called them to tell them that they should come, he wanted to accept Christ, because yesterday he was healed after they prayed, so he wanted to give Jesus his life. So the pastor went and led him in the prayer of confession. He was very happy after that, and they arranged another day that the pastor could come and meet with him to follow up with him. This pastor also spoke with a woman named Marceline who prayed to receive Christ. The next day, when they met Marceline for follow-up, they met another woman there who had given up on life and was considering committing suicide, but instead, she prayed that day to receive Christ.

The Director of Evangelism of the Baptist Church was among the participants who stayed throughout the training said, “This is what we have been longing for in this Church.  We have been wanting to go out to evangelize as a group, but we didn’t know how to do it. You have come at the right time.”

A lady who had been trained with Campus Crusade for Christ said, “I have neglected the work of witnessing that I used to do before, but I have been revived by what you have taught us! I shared with many people during the three days we all went out together, and I feel so encouraged. Your materials were so simple to handle and speak right to the level of a new believer.”

Ebang Eric also said, “I have been struggling in my spiritual life to live a victorious life; it felt impossible for me, but I have learned during this training how I must live in the Spirit by allowing Christ to control my life, and to listen to Him through his Word and other believers who God can use to speak to me. I also learned that I need follow-up to be able to stand firm in my faith, and I need to follow up new believers to help them become mature in their faith.”

Marvelous Nanye also wrote that before coming to this training her spiritual life was weak, “I had no zeal to share my faith with others, I felt too proud.  I used words that are not good for a Christian to use, I didn’t pray, but I expected God to answer me. Because of this training, I realized my mistakes. I prayed to God, I went out to witness, and many souls were won to Christ. I pleaded with the Holy Spirit to direct me in my spiritual life now.”

Rev Joel said, “This is a very special training that is very clear and shows how to present the gospel briefly without causing any arguments. The follow-ups are wonderful, they relate easily to everyday life experience.”

Another trainee wrote, “I am so glad because of this program— before the seminar began, I had not learned how to preach, and any time I wanted to preach fear would just fill me. In this program I learned how to be bold.  I have always been ashamed to preach to people of other religions, but during this program I was able to preach to a Muslim who prayed to receive Christ. He asked me several questions, but I was able to give him the answers. I believe it was the boldness you people gave me that made me to be able to preach. I promise you before we meet again you will hear of the many things I have done with this training.”

Ngong Sandra said, “This training has done a wonderful thing in my life. Before coming here, I was born again, yes, but I had never undergone any follow up. I had a list of things I knew I should do as a Christian, but the greatest challenge in my life was sharing Christ with others. I wondered how to start and worried about what to do if the person said no or was already a Christian. Here I have learned so many things that I did not fully understand. Leaving here, I believe that I will be a good evangelist by God’s grace. It has always been my dream to do so, and so I thank God I have been trained to do it well, and I trust God to help me. I hope that the lives of the people around me like my family, friends, and classmates, will never be the same, with God being my helper. From the bottom of my heart I thank God and the trainers for this training, it has been wonderful.”

We thank God for his work among the trainees, and look forward to continuing to work in Cameroon, by His grace!