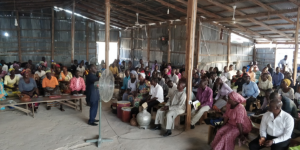 We had a trainers’ training from the 6th – 8th of September. We had people from Cameroon, and Comfort from Maiduguri, Jonah and Jacob from Jalingo, Mwanta from Nassarawa, Sunday and Benjamin from NLFA, and some pastors of COCIN then volunteers working with us. We specifically trained on how to teach people in knowledge, attitude, and practice and how to inspire them to want to follow God. There were 17 people, who all intend to train others when they return, some of them began immediately!

The following week was the International conference where pastors, evangelist and all church  workers are pulled together to a conference where they are encourage and mobilize on how to witness. People from Nigeria, Cameroun, and Niger Republic came. Our ministry is responsible for mobilizing the international guest speakers from abroad; we had 4 foreigners and the rest from within the country. They spoke of the cost of the gospel. They also had small groups where the participants could be taught on a more personal basis and also be trained on how to conduct follow-up with new believers. Our ministry was also involved in this aspect to train and provide the materials to those going to the outreach to enable them have what they will use during the outreach in Bali.

The ministry went to the United Methodist Church of Nigeria, Jalingo and held a training which we had originally organized for three hundred pastors. We ended up giving materials to over 450 people, though some of them did not stay all through the training. This forced us to split the class into two (English and Hausa) to enable us have a proper communication and relationship in the presentation. This gave us better impact by having a smaller number of people in the class were listening to us.

The bishop came to the opening and declared the training open, and he left us to continue, and there were other leaders who continue to be with us throughout the period of the training. The bishop organized a dinner were he fed us and have time with us and so also the host Church where the training was taking place also prepare a meal for us in one of the nights.

The first two days which we are to go out for field practicals, there was rain on the first day, and on the second day more people went out and share with others. Some could even went and witness to Muslims which gave the joy and confidence in witnessing to others.

On the fifth day which we are to have the two last sessions and the review, there was another Episcopal conference where we had to stop by 9:30am to allow those that came for the meeting to continue. They met base on their conferences and came up with proposal on how they intent to go and implement what they have learn. Two conferences have already propose dates that they will want to continue the train their members and to begin to go out for outreaches. 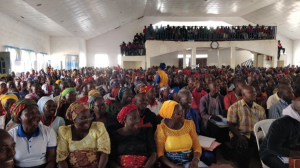 Isah said, I learned that I was called by God and my duty as a leader is to share whatever God has taught me. he added that he has been having problems on how to witness because he had only one idea of witnessing but this training has giving him another way of witnessing. I wish the days of the training could be more than the five days. He has set out two days in a week to witness and follow up with others.

Rev. Silas  said this training has helped me personally on how to put to death my sinful life and to live by faith. It has helped me on how to train others, build new believers in their faith. He intend to train members of his congregation on how to continue to build new believers. He also wish if we will organized this kind of training it should be in the dry season not the rainy season.

Daphee  said I learn that as a believer, challenges are there in my way to help me build up my faith in God and also strengthen me because the more I overcome them the more strength I got. The training has given me guidelines on how to teach my disciples the truth about their stand in the faith. He also learned how to teach the new believers on how to live for God. He then plans to be teaching his disciples more of this strategy on how to use the Gospel cards, to reach out to the Muslims.

Felix  also said he had learned how to reach the unbelievers with the gospel and how to be humble and sincere in loving others as Christ did. The training has awaking him on how to stand by the word of God. He also learns how to burst in the lord not with what he has or who he is. He plans to reach others with the gospel and continue to follow up the new believers and train them on how to reach out to others.

Ayuba learned that God love every one and cares for everyone  he is also merciful to everyone who believes in him, to him the training has encourage him to be faithful in his ministry as a pastor and obey what the word of God said to him , how he care for the church. He wish we could have been going out on the field practical’s where every one of them will be given the opportunity to witness. He intends to go and implement what he has learned.

John learned as a believer, he has passed from death to life and that has given him Joy to know that he has  great assurance that God who began this work of salvation will carry it to completion on the day of our lord Jesus Christ. This training has helped him to imitate Christ, and to be sincere and humble in living the Christian life, and not to grieve the Holy Spirit. He then advice us to have film show and play lets to draw the attention of people to what you intend to teach for the whole week. He has pan to train 250 youths in 1st – 3rd April 2019.

Godfree on his part said that he has learn how to approach the unbelievers and to talk to him or her about life, he also learn that God has chosen the unimportant people to use them as his instruments. He plans to start applying this training to his family members to some groups and he want to reach out to other people of different faith with the gospel. He wish we should keep organizing this program to strengthen their faith and then help them keep on with the work of evangelism.

Amos  learned the need to follow the new believer on how to care for the new believers not just to make decisions but to build them up to be matured in the faith. He as a leader needs to practice what he teaches, to share his experiences with others.

Gaius said, I receive a new knowledge and breakthrough on how to confront an unbeliever with the gospel and how to guide him to become matured in the faith. The training has helped me in a manner that I need to teach the members of my organization to be telling others the great news of Jesus Christ.

Danladi learned that following God is a great task that requires us to throw our bad past to be committed in following him. This training has helped me in my lifestyle as a Christian on how to deal with my old life by putting it to death.

Iliyasu   learn how to make disciples, how to preach to unbelievers to be build in the faith and follow Jesus. He then plans to go out to the unbelievers with the gospel.

Rev. Aminu said that he learned how to approach new converts; he had experience how to reach out with the gospel to the unbelievers. The training has improve his knowledge on how to love one another, he wish we had time to reach out with the gospel to different areas such as hospital, or prisons. He plans to organize this training within his local church.

Lydia learned how to show love and be compassionate to others and how to build new believers to grow in their faith. She plans to teach her children and neighbor.

Another said I learned a lot from the life of Jesus as he was humble, merciful, loving even to the

Another one said that he has learn that the salvation that Jesus gave him to set him free from all bondage, he also learn how to preach to the unbelievers that Jesus is the only savior.

Most of them need more materials!

The next week we went for the training with The ECWA Taraba DCC where they have plan on having 130 people who had earlier signed for the training but because there were crisis in some of the villages which some of them could not leave their villages to come out so we ended up with about hundred participants.

We started on the first day with over eighty people which the DCC leaders were always present, the chairman, secretary, vice chairman and the assistant secretary. The local overseers, pastors and leaders from different groups were present.

Some of them who were able to go out for witnessing were so happy the way the training has help them to reach more than how they have been doing before because the pictures are simple to explain, the verses are there to guide one and the card also keep changing catch the attention of the person one is sharing with.