Bonga is an economically depressed area far out in the wilderness, where there is no running water. They ended up changing accommodations mid-trip, because half the team got tired of having only Rich’s old coffee pot to heat water to bathe with! 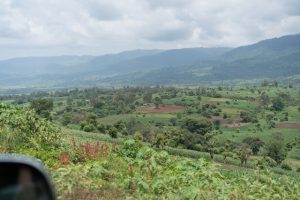 Animism is the main competing religion to Christianity; the evangelists from the area told Rich there are over 1,000 witch doctors active. Bonga is well-known for a couple of other reasons as well, it is within a half a mile of where coffee was discovered, and has a beautiful natural bridge called “God’s bridge”. 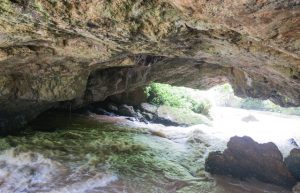 When Rich, Roman, Eskendir and Eyasu arrived, their local hosts urged them to come on a walk to see it before the training, saying it was only ten minutes away. They decided to go see it, as Eskendir also told the group that he had been baptized there in secret during communist times! 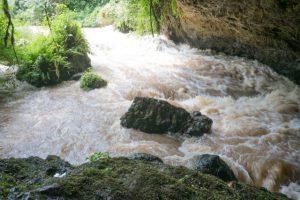 By the time Rich, Roman, and Eyasu realized it would take much longer than ten minutes, they had already been fighting their way through deep mud down treacherously steep terrain for so long that they did not want to give up. Rich said that this was by far the most physically challenging trip he has ever gone on–and he has hiked over mountains to reach people groups in Nigeria!

Along the way, they also saw a poisonous green snake that their guides told them if it bit any one of them, they would die if they didn’t get help in time.

The bridge was stunning to see, and Rich was glad to have seen it. However, on the trip back up, he fell completely down at last, was covered in mud, and had to be dragged out by the arms by the others. By the time they fought their way up to the training location, they were an hour and a half late. The rest of the team wanted Rich to take time to clean up, but Rich walked straight into class, and said, “Now, the rest of the team may remember it differently…” and proceeded to tell a long tale wherein he singlehandedly pulled all of the other men up the hill of mud, and fought off a poisonous snake to save their lives. The entire class howled with laughter through the story, and the training began with everyone in high spirits. 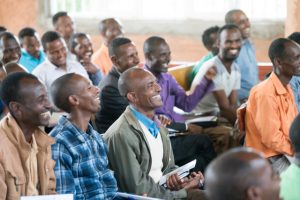 In Bonga, we had planned for 60 evangelists, but the local church paid for twenty three more of their people to come and join, calling back missionaries and workers from hundreds of miles away. Eyasu has already reported that they have begun training 1,121 church leaders and members in the evangelism and follow up training. 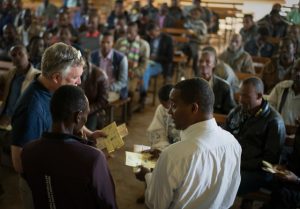 They need prayer as they begin doing this! Please pray for us and for them as we need more resources, more personnel and more funding, to do more trainings in Ethiopia to meet the need, and as they continue to work for the Lord in this challenging area!