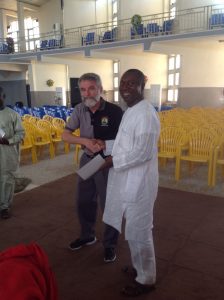 Peter Wash, Rick Cordell, and their team went to Jalingo in October as part of a longer trip throughout Taraba state. All of the other trainings were well-attended, but the Jalingo turnout was surprisingly poor–only ten people turned up out of the 120 registered. Peter reported that the divisions between denominations and churches had been behind the poor turn-out; they just couldn’t work together. Reports from the area were that the Church is so divided people from the community were being enticed away from Christianity. Despite this disheartening beginning, the team decided to stay, in large part because of the enthusiasm and eagerness to learn demonstrated by Reverend Musa.

During the training, FFICM staff were approached by Gindiri College of Theology in the area and after their evangelism and missions class attended the training, were asked to return and do trainings for all of their seminary students! Our staff were greatly encouraged by this door opening during a time of disappointment with the turnout for the training–and continued also to be encouraged by Reverend Musa.

We received a letter from him after the training in which he said, “In my seventeen years of post-ordination experience, I have received advance ministry training in Singapore, Nairobi, and the US–but nothing so valuable as the training from Peter Wash and Rick Cordell and the FFICM staff here in Jalingo in October…The Gospel tool that they gave us is a simple, down-to-earth explanation of the mind of God towards the lost…None of my theological trainings gave me such a useful tool…I can now confidently lead people to Jesus and get them started in their new life as a disciple”.

Sunday Mallam took a trip later to find out what had happened since the trainings in Taraba state and found that Reverend Musa has already used the follow-up materials with many people, and has equipped many from his congregation to go out witnessing and following up. The local lutheran bishop was so impressed with Rev. Musa’s work that he wants FFICM to return and train all of their pastors from the area. Rev. Musa’s large congregation is inspired as well, and would all like to be trained with LCCN (the Lutheran denomination). We praise God for this demonstration of unity within the Church and pray that God will bless the upcoming training! Peter is now planning to take a team to the area in February after the trip to Cameroon.

Please pray that God blesses the training in February and continues to foster unity within the Church in Jalingo, and the work of the Lord will go forward in power through these newly-unified brothers and sisters! We praise God for the faithfulness of his servant, Rev. Musa.