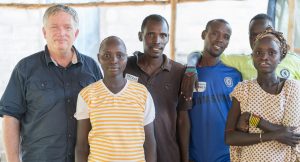 Esther and her family, pictured above with Rich

Dasenich, where Esther grew up, is a violent region with a harsh climate. The people often suffer from hunger. During one of these times of famine, when Esther was young, her mother died in childbirth, and her father abandoned her, her sister, and her brother. Esther provided for her siblings by working for an evangelist who worked in the area, cleaning his house and making food for him, and in return he gave them room and board.

Soon, Esther, her sister and brother became Christians. The people in the region where they live detest Christians. Esther said that they will often try to beat a person until they recant their faith. They don’t intentionally kill people, but if the person dies, they do not care.

However, when another young man from their village became a Christian, he and Esther’s sister married. This young man owned 7 goats, and these goats became the little family’s lifeline. They could sell milk from the goats and provide for themselves.

Esther did not feel called to marry yet. Although custom dictated that girls marry at 13 or 14, she wanted to continue school, and she did. At 14, she was called by God to be an evangelist, and would go after school to speak about the word of God to her community, risking beating and death. The villagers did beat Esther at first, but later, often something happened to distract or prevent them from carrying out their plans.

Soon, Esther’s sister became pregnant. Everyone in the village expected her to die in childbirth, because she did not carry out the cultural ritual of shaving her head during her pregnancy. She did not die, and had a very healthy baby! Still, the villagers waited, expecting someone in her family to die as a result. But instead, they watched as God blessed Esther and her family and gave them more than enough food and provision. They began to wonder about this God who had protected and provided for Esther and her family.

Eventually, the aging evangelist that Esther had worked for left the region, but he connected her to a church that began supporting her in her work. Esther married a young man who had become a Christian as a result of her evangelism, and had a baby at 16, having completed 8th grade. Despite her increased work and family responsibilities, Esther continued working as an evangelist.

Then, Esther’s father came home. The community despised him for abandoning his family, and he was too afraid to go and see Esther and her brother and sister, so he lived at his sister’s house, and hid from them. When they heard of this, they went to him. First, her sister, and then Esther, invited him into their homes and forgave him. He now lives with them, and has became a Christian also.

Today, Esther is 20, with a four-year-old son, and has led over forty people in her region to Christ!

When she came to the conference to be trained this year, Eyasu and Rich were immediately impressed by her intelligence and dedication. She is fluent in local languages as well as Amheric, and translated the entire week of training for the other workers from her region. Eyasu is excited about her, as the denomination has an extremely hard time recruiting evangelists to go to Dasenich at all, and their success rate is very low. Esther is called, passionate, uniquely equipped as a native of the area, and already seeing the fruit of the Holy Spirit’s work in her life in her community.

We will continue to update you as we hear from Eyasu how Esther’s work is going now that she has received training! Please pray for her, as she continues to work in a region where few people will go.