In mid-October Firm Foundation in Christ Ministries travelled to Taraba state in collaboration with New Life For All in Taraba State to do a training. We were initially scheduled to go to the Mambila plateau (Gembu) Area but they could not mobilize their people to come for the seminar in time, so the training was shifted to Bali area. The Bali area is ripe with need for the gospel, as we saw when we went out for the field practical—there was a lot of drunkenness, immorality, traditional worship, and more.  This is one of the local government areas where people are still unclothed and steeped in traditional worship. This is one of the target areas for the outreach next year that will be run for New Life For All. 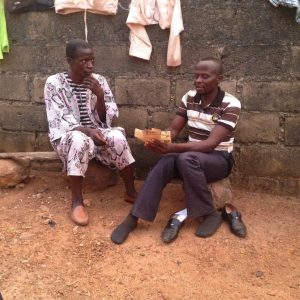 The field practicals are powerful times where we get to see how God uses ordinary women and men to reach people for the gospel. Rich Cordell taught the trainees in the personal sessions about how God uses ordinary people, and encouraged them to remember that we are working with God not working for God. At the end of the training a woman came forward and gave testimony as to how God had used the personal sessions to change her perspective about her children and the people that are under her.

We then went out for the practical and spoke with a Muslim who said that no Christians had yet come to preach to them like we were doing, and that this is why they have so many problems in their society. In another drinking joint, we met a man who said that he would not have continued drinking in the past, if someone had come to speak to him directly about his problem, as we were doing now. We witnessed to more than 70 people of which more than 20 gave their lives to Christ.

The people that we had witnessed to began inviting others to come and listen to us when we went for the field practicals. At one house in the village, one of our groups met two women. One was not from that compound, and invited them to come the following day to her house. When they came, she had already invited four other women to come and listen to the gospel. So, instead of sharing the follow-up materials with her, they started again from the beginning with the gospel card. All four women prayed to received Christ!

The class sessions were a wonderful time for spiritual nourishment, where both pastors and evangelists were sharpened for their work. One week after the training a pastor called Joshua sent a text to tell me how transformed he was as a result of the program.

At the closing ceremony we came up with a strategic plan where we discussed the total population of the two dominant local government areas. We estimated the population to be 80,000 people, of which 20,000 may be members of a church. Out of the 20,000 Christians, perhaps 10,000 thousand are true Christians. One of the evangelists said at the closing ceremony, “I thank God and these organizations for helping me to be a true Christian, bound for heaven. Before coming to this seminar, I was not a Christian at all. I had not truly given my life to Christ, and nobody had ever followed-up with me. I had no assurance that I would make it if Jesus was to come.” He added, “I am a politician that knows how to convince others. I pray that I may now use my gift to convince people to come to faith in Jesus.” 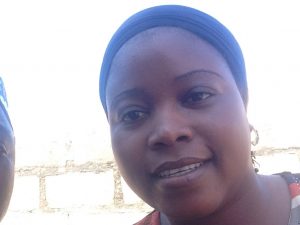 Sarah also testified that she was not planning on coming, but had come because her friend insisted. She said, “I was thinking that I would not be able to stay in the program because of a sickness that I am suffering from, but since I came, I have forgotten that I was sick and that I was thinking of going home. I stayed throughout the whole five days and I even went out to preach the gospel, which is something that I had never thought I will be able to do. I did not feel the sickness that I use to fear before. I went home and shared the gospel card with my husband, who then said, ‘If this is what you are going to church for, then you can keep on going!’” She also said, “I was waiting to see what kind of special food they would serve the white man among us, but he takes up his own plate and gets his own food which is something that our ‘leaders’ here will never do. And if one of us has a need to ask anything from the trainers, they all respond with smiles and we do not feel looked down on. This humility has touched me and has taught me that I need to be humble too.”

We then moved on Jalingo after the closing ceremonies in the Bali aria, to continue the training which was scheduled to be conducted for the United Methodist Church of Nigeria (UMCN), churches within the area. The turn-out was very poor, we were expecting 120 people but on the first day only less than ten people showed up and were not focused exclusively on the program (they often went out to conduct personal business.) We stayed because we were to stay again there for the next week to go to another zone, if not we would have had to cancel the next program as well. 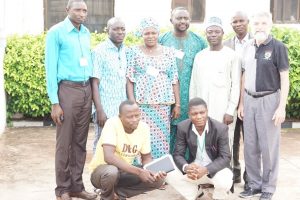 We also decided to stay, because the masters students from Gindiri College of Theology all came, including their lecturer. They are studying missions and evangelism. Two of them, the deputy provost’s wife, and their lecturer (who is the registrar of the school) now wants to invite our ministry to their school to train all of the students how to witness and how to follow-up new believers. They are excited to about this, because our training will give their students the basic principles as to how to build up new believers from the beginning of their faith. 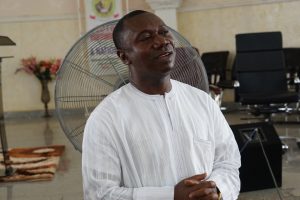 Another person for whose sake we stayed, was this reverend pictured above. He is the pastor of the venue we used. He has more than 2000 people in his congregations, but he forfeited all other engagements and stayed for the training throughout. He even went out witnessing to a Catholic house where he knew that they knew about Jesus but they they did not have a personal relationship with him. So the pastor and Rick went and witnessed to the five children as well, and all prayed to receive Christ. The youngest, who was six, was sick, but insisted on reading the John 3:16 verse. She did it perfectly! They invited Rick and the pastor to come for follow-up training, and they witnessed to the next house as well. As a result of that, the family offered to prepare lunch for all 13 people from the training. 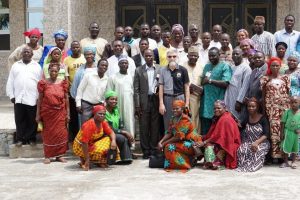 During the closing ceremony, a trainee named Geoffrey said, “I have preached to people before, some of whom have even gone to Bible schools, but I did not follow-up with any of them. It was the grace of God that some survived to stand in the faith. But what I have learned in this training is that, ‘I will never give birth to new babies and abandon them by the roadside.’ I have learned how to continue on to build up their faith.” Evan Zebedee said, “I did not understood how to approach Muslims in my preaching, but through the use of this gospel card I even tried it with a friend of mine who is a Muslim and it was successful.”  Daniel Sale said, “I have learned a new way to approach unbelievers now. I used to think, ‘The fish that is already in the net does not need to be cared for,’ but now I know how to care for new believers.” Another trainee said that he used to be of the opinion that Christians need our time so much that we don’t have time for the unreached. This training had opened his eyes to the need for witnessing, and had showed him how to start building up leaders in the church to help do the work.

We then moved on to Takum. The participants were to come from the two largest denominations in the area, the Christian Reformed Church in Nigeria, and the Reformed Church of Christ in the Nations. One of the signs that this would be a successful training was that on Sunday, when we visited the church, the choir that sang included many from other denominations—they had great unity among the Christians of this area. We started with over 70 people registered, and the number increased to over 90 on the second day. They all went out together for field work. Even the President and the General Secretary of the CRCN came for the training and field work, which motivated all the pastors that were nominated to come.

They have all agreed that now that they have received this training they need to begin praying as a team in order to plan how to reach the people here in Taraba, especially the ones that are still traditionalists and have not heard the gospel at all. They have learned through the training that when they work together as a team irrespective of their denominational differences, they can accomplish much for the gospel.

The biggest challenge in the other areas is that there are serious divisions in the churches which makes it difficult for the Church to come together. This was what caused the training in Jalingo to have such a poor turn-out. Secondly, the Muslims in the area are developing a strategy to bribe Christian women with money and marriage in order to convert them. We need to pray for their protection. We also need to train more people who will be able to handle the new converts as the New Life For all will be coming in the next year to Taraba for an outreach to villages!